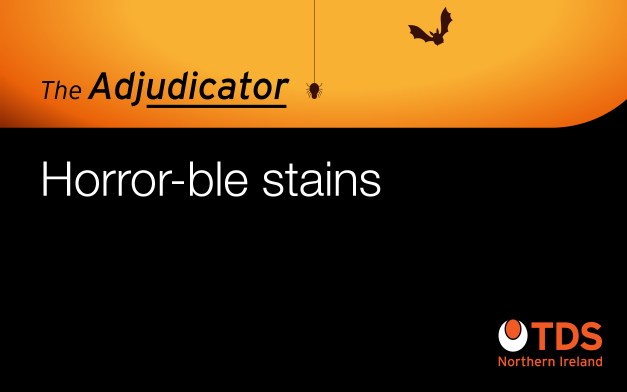 The landlord claimed £450 for the cost of a replacement sofa as a stain was apparent at the end of the tenancy, which the landlord said could not be removed by cleaning. An invoice for a replacement sofa was included in the evidence. The tenant admitted causing the stain during the tenancy but suggested that he was not responsible, as the sofa was new at the start of the six-month tenancy, and it should have been treated with a stain repellent.

The adjudicator had a choice of one of three remedies; making good ( for example cleaning or repair), a contribution towards replacement costs (making an allowance for fair wear and tear), or lastly, making a compensatory award to reflect the damage.

The tenant’s argument about the lack of stain repellent to the sofa when new was not a defence to the obligation to return the property and its contents in the same pre-tenancy condition (allowing for fair wear and tear). The check-in report recorded that the sofa was new. The check-out report recorded that the sofa was stained at the end of the tenancy. To support the claim, the landlord provided in addition to the written condition reports, a dated photograph taken at check-out showing the extent of the staining to the sofa.

The adjudicator was not persuaded that a claim for replacement of the sofa was appropriate, given the lack of severity and the relatively small size and location of the stain.  As there was no evidence to show that an attempt had already been made to remove the stain by cleaning, but was unsuccessful, the adjudicator considered that the most appropriate remedy was to make an award for cleaning.

The landlord was awarded £365 of the initial £450 claim whilst the tenant was awarded an amount of £85.00 as this was felt to be fair and reasonable by the adjudicator when taking into account the size of the stain.

Key Pointers to Take Away

TDS Custodial: where TDS hold the deposit for the duration of the tenancy. Landlords, you can protect your deposits for FREE today.