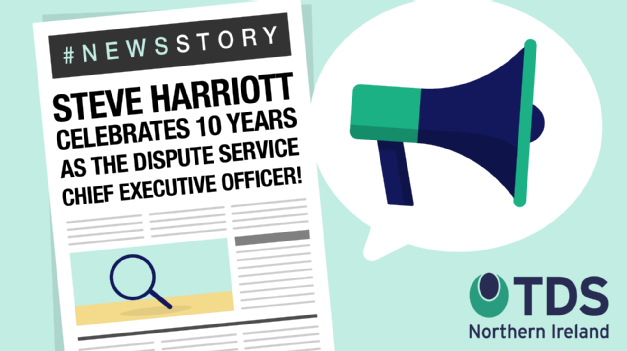 The 27th September 2020 was an important milestone for the Dispute Service as Chief Executive Officer (CEO), Steve Harriott, marked his 10th year with the Dispute Service. The company has grown enormously under Steve’s leadership over the past decade. In that time, he has actively implemented the organisation’s vision of raising standards in the private rented sector and been the driving force behind the customer focussed and innovation culture at the Dispute Service, which ensures we continue to be a forward-thinking organisation in an ever-changing environment.

The expansion of the Dispute Service is testament to Steve’s leadership and passion for both the business and its employees. Steve genuinely cares about excellent customer service and raising standards in the private rented sector.

The last ten years has seen the workforce triple in size across the UK, with the organisation now operating three tenancy deposit schemes as opposed to just one in 2010; Tenancy Deposit Scheme (TDS) England and Wales, SafeDeposits Scotland and TDS Northern Ireland as well as providing the ADR service for Zero Deposit.  The Dispute Service also launched TDS Resolution in July 2020, intended to help landlords and tenants resolve rent arrear issues caused by the Covid 19 pandemic.

Since starting as CEO, Steve has experienced and navigated many unforeseen challenges. The office fire in 2019 totally destroyed the TDS Head office but thanks to a robust continuity plan and commitment from TDS colleagues, the company was up and answering calls the very next day. This shows the resilience that Steve has instilled within the culture of TDS for the workforce to operate so efficiently when faced with such adversity. These efforts resulted in TDS winning the ‘Most Effective Recovery’ at the CIR Business Continuity Awards, just one of many awards the company has won under Steve’s watch, including for Customer Service Excellence award, ESTA Awards for best tenancy deposit scheme, BSI award for complaints handling and being recognised as a Sunday Times Top 100 company to work for.

That same workforce flexibility and efficiency has been evident throughout the Covid-19 pandemic, as TDS staff have seamlessly adapted to homeworking and maintained high service levels throughout. Steve and his Leadership team have been in constant contact to monitor staff well-being and productivity, ensuring that TDS is still a fantastic place to work – even when that work is being carried out remotely.

Steve has also spearheaded many new initiatives and working relationships over the years, including providing the ADR service for Zero Deposit, and partnership initiatives with The Depositary and Inventory Hive to name a few.

Here is what Steve had to say about achieving ten years’ service as CEO of TDS:

” I feel we have come a long way in the last ten years and throughout this journey I have been supported by Martin Partington as Chair (who has also achieved ten years service this year) and by all the other Board members at TDS. I am keen to acknowledge the great support I have received from the Executive Team but particularly my Deputy Chief Executive, Nick Hankey, who has accompanied me over the past nine years of this journey and of course a big thanks to the current staff team who have kept the company growing over all of the years.”

Nick Hankey, Deputy Chief Executive (Resources) at TDS, added, “Steve has a thirst for knowledge and new skills. He researches and reads to ensure he is at the cutting edge of industry knowledge and that TDS does not miss chances to grow and change for the better. We are lucky to have such a forward-thinking CEO. He is pragmatic and always gets things moving.”

Everyone at TDS extends their congratulations to Steve on this accomplishment and wishes him many more successes over the next decade.

About the Dispute Service

The Dispute Service was established in 2003 to operate Tenancy Deposit Scheme (TDS) across the UK and to provide dispute resolution services.

TDS Resolution is a resolution scheme intended to resolve rent arrears between landlords and tenants.