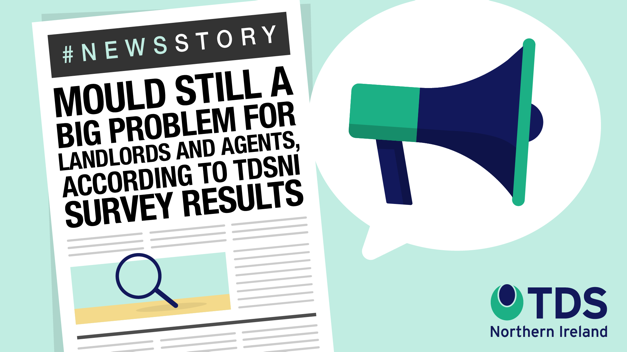 Mould and damp are repeat offenders in end-of-tenancy disputes.  If left untreated, mould can rot wooden window frames, stain your carpets, damage paintwork and cause peeling and cracks to walls and ceilings. As for living in a mouldy property, it can be the cause of several health conditions such as respiratory infections, allergies, and asthma. Therefore if you’ve got a mould problem in your property, it’s important to deal with it before it becomes a bigger problem.

In our recent mould survey sent out in our monthly newsletter, over 400 agents and landlords responded, which helped to reveal the common issues and causes of mould and condensation in private rented properties. As cleaning and damage continue to top the list of reasons for disputes, TDSNI were keen to hear more from their customers about the most problematic issues.

The most common causes of mould: results

The survey results showed that the majority of landlords agree that mould could be either the landlord’s or tenant’s responsibility depending on the situation. However, over 75% of the landlords and agents who responded had experienced mould in their property due to their belief of tenant neglect.

Causes for mould varied, and there was often more than one room affected with more than one cause given by the survey responders, but the most common rooms that suffered were bedrooms and bathrooms.

The most prevalent triggers for mould causes were:

Are landlords and agents doing their part?

Of those surveyed, you are on the case with over 80% of landlords and agents who would deal with a report of mould from a tenant within seven days. However, only 35% specifically mention mould in a tenancy agreement regarding tenant responsibilities and property care, even though 75% would give their tenant guidance on how to avoid or tackle damp, condensation and mould in the property. TDSNI encourages property professionals to include as much information as possible in tenancy agreements and issue guidance. Hence, tenants are aware of their responsibilities and steps that can be taken regarding mould and condensation.

Our survey also showed that only half of landlords and agents would check for mould at every inspection stage (check-in, check-out and mid tenancy). TDSNI recommends checking for mould throughout the tenancy to help avoid mould-related disputes.  Please look at our helpful guide for landlords, agents and tenants on Top Tips for Mould Removal and Prevention

Whilst only 13% of landlords and agents who responded have raised a deposit deduction claim for mould, the survey highlights how important it is for both tenants and property professionals to be aware of mould causes and its prevalence to help avoid tenancy deposit disputes.

If you’d like to read more, please take a look at our real-life case studies on the topic of mould.

Tenancy Deposit Scheme (TDS) is a government approved scheme for the protection of tenancy deposits; TDS offers both Insured and Custodial protection and provides fair adjudication for disputes that arise over the tenancy deposits that we protect.